Bitcoin’s price volatility has been one of the project’s defining features. In its early days, the price of BTC could fluctuate by as much as 15%, when measuring the standard deviation of daily returns across 30-60 days.

That sort of price volatility put Bitcoin on par with national currencies such as Sierra Leone’s leone, Uzbekistan’s so’m and Nigeria’s naira in terms of purchasing power. 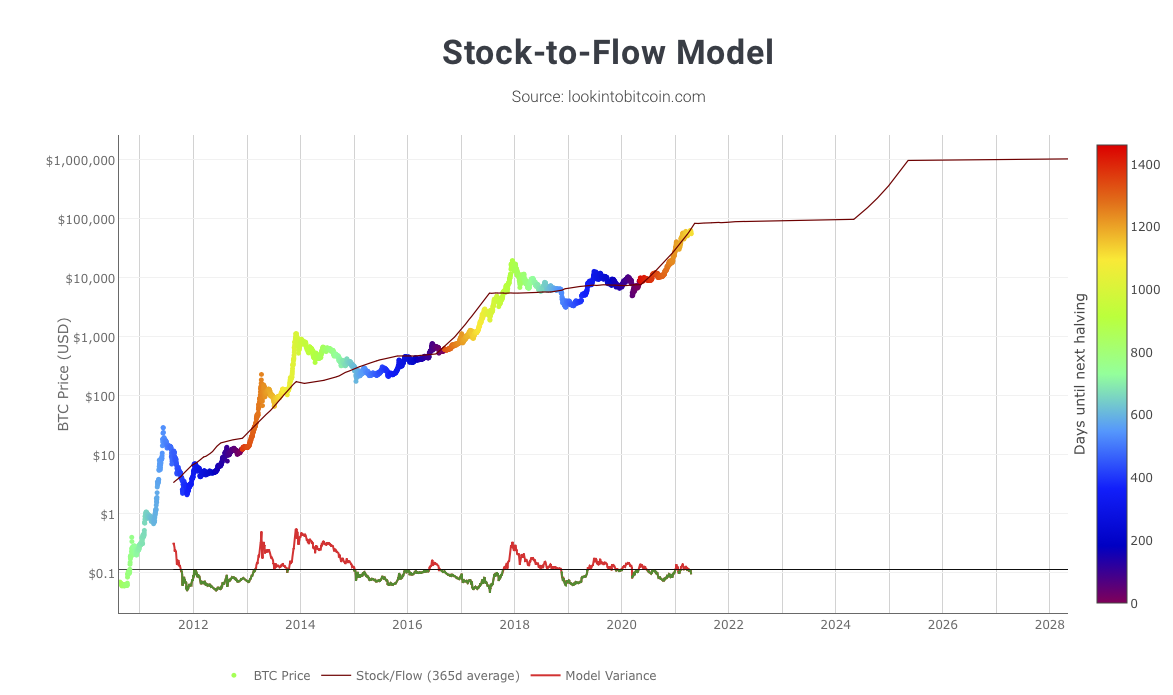 While Bitcoin’s volatility has dropped in recent years – between 2-4% typically in the last 12 months – predicting Bitcoin’s price has continued to be an established and well-trodden corner of the cryptocurrency space.

Dozens of analysts study charts to unearth subtle shifts in Bitcoin’s price to help discern where the cryptocurrency might move to next.

More broadly, commentators have suggested that Bitcoin’s price will ultimately go to zero, while others have said there is no theoretical limit to how high the cryptocurrency could go.

Among all these models and predictions is an idea that has captured the imagination of plaudits and critics alike: the stock-to-flow model.

The idea behind it is simple: as Bitcoin’s scarcity continues to increase, so will the price. Thus far, as the above chart appears to signify, the model has largely tracked the price of Bitcoin.

This has led to intense debate about the merits of the model: some believe the model is the reason why institutional investors have become so involved in the space – because it suggests Bitcoin will 10x in value over the next few years.

Others however, suggest the oversimplification of supply and demand is an unreliable reason to invest and highlights several flaws in the model.

What is the stock to flow model?

The stock-to-flow pricing model was created by anonymous Twitter user PlanB, who claims to be a Dutch institutional investor with a legal and quantitative finance background that manages around $100 billion in assets.

The model is a calculation of a ratio based on the existing supply of an asset against how much is entering circulation. The higher the number, the longer it will take for production to meet existing demands and the more scarce an asset is.

Bitcoin’s is 50, after the network went through its third halving last year, reducing its reward to miners from 12.5 to 6.25 Bitcoin. The rewards to miners are an important feature of the stock-to-flow model.

Commodities like gold and silver struggle to significantly increase their supply i.e. the process of searching for gold and then mining it is expensive and takes time.

Bitcoin is similar because it is also scarce by design. When the anonymous creator Satoshi Nakamoto created Bitcoin, it was supposed to have a limited supply that was going to become harder to extract from the network as time went on. At the time of writing, nearly 90% of Bitcoin’s supply has already been issued.

This increasing scarcity, says the stock-to-flow model is why Bitcoin’s price is expected to hit $1 million sometime in 2025 as it creates upwards pressure on the price. PlanB has subsequently released an updated version of his stock-to-flow model which revises Bitcoin’s growth to around $288,000 by 2021. Despite the change, there are many who still believe in PlanB’s model.

Earlier this year, PlanB polled his users to ask how many agreed with his assessment that Bitcoin’s price would continue to grow inline with his projections. A third agreed with PlanB’s model, with almost all believing a variant on the model was likely to come true.

“What the model does is give us some evidence to show [stock-to-flow] is an important variable in understanding bitcoin value,” bitcoin analyst Nick Emblow said via Twitter.

Fundstrat’s Tom Lee and Tim Draper, one of the earliest bitcoin investors, have both been active proponents of PlanB’s model.

“One should think about [PlanB’s stock-to-flow] model like Moore’s Law,” said Adam Back, the founder and chief executive of Canada-based bitcoin and blockchain technology company Blockstream, referencing Moore’s projection that the number of transistors in microprocessors would double every two years.

In August 2020, Fidelity Digital Assets analyzed the S2F valuation model, suggesting that the stock-to-flow model did have some merit.

BNY Mellon, the largest custodian bank in the world, with over $25 trillion in assets, also examined the model in its recent report on predicting Bitcoin’s price. While it did criticise the model for some of its core features, it’s inclusion in the report has helped add credibility to PlanB’s model.

But there are also a number of critics who believe the model completely ignores some of the fundamentals of the cryptocurrency.

Why stock-to-flow is wrong

One of the most vocal critics has been Ethereum co-founder Vitalik Buterin. In a tweet he argued: “the ‘halvings cause BTC price rises’ theory is unfalsifiable: Was the peak before the halving? Then it ‘rose in anticipation of the halving’ During? ‘Because of the halving’ After? ‘Because of…’ The last $20k peak was near the halfway point between the 2016 and 2020 halvings.”

Put simply, Buterin thinks that the theory is impossible to disprove, because analysts can attribute any price as evidence that the stock-to-flow model is correct. Thus, it’s not particularly helpful. Others have been more withering in their critique.

Nico Cordeiro is the chief investment officer and fund manager at Strix Leviathan, believes the model’s accuracy will likely be about as successful at forecasting bitcoin’s future price as the astrological models of the past were at predicting financial outcomes.

Cordeiro highlights that the model is “based on the assertion that the USD market capitalization of a monetary good (e.g. gold and silver) is derived directly from their rate of new supply.” The fund manager argues that no evidence or research has been provided to support this idea, other than the singular data points selected to chart gold and silver’s market capitalization against bitcoin’s trajectory.

Cordeiro also highlights issues with PlanB’s assertion that gold’s price continues to rise as its scarcity increases. However, gold’s market capitalization has oscillated between $60 billion to $9 trillion, all while maintaining the same stock-to-flow value of around 60.

Despite a growing chorus of critics, the stock-to-flow model continues to resonate around crypto, whether investors agree with it, or not.

Created by Saidler & Co. and Decrypt.

How to use DeFi to enhance an existing crypto portfolio
Saidler & Co. Launches own 24/7 Proprietary Trading and Research Firm

What Is EIP 1559 and Why Are Markets so Excited About it?